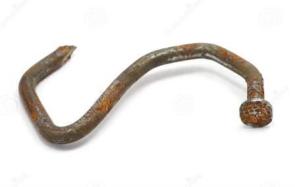 A nail, bent from being caught every time by the wind-swung old shed door
Slowly begins to rust, its response to facing all that weather could ever offer
It had become a metaphor for life, as it was slowly and completely devoured.

There had been a time when it was bright, and very shiny
A time when life was rich with possibility and hopefulness
The time of plenty, of joy, and of such great prospects.

But, as with so much in life, the nail was always at the mercy of that old door
A door that was relentless, absolutely relentless, in its need to close
And as with most things, it was gradually weakened by the persistent pressure.

It was just a little at first as it withstood the battering shed door
Though inevitably, the rust got inside the old nail’s core
And it slowly began its gradual decline from usefulness.

Until one day a heavy wind, stronger than ever before
Lifted the old shed right off its base, and dropped it, completely shattered
And the old rusty nail was found lying on the floor, broken in two.

And as with all rusty broken things, it was gathered up
Dropped in a nondescript, soon to be thrown out itself, rusty bin
Never to be of any use to anyone or anything ever again.