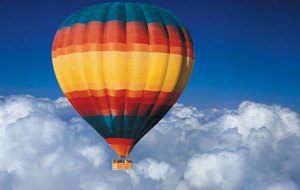 To toast the official opening
Of our village Millennium Green
Twelve of us went on a journey
To see sights we’d never seen.

With a degree of apprehension
We were all of one accord
With an enormous basket that was attached
To a hot-air balloon we all got on board.

Whooshhh was the noise from the burner
As the pilot lifted up off the ground
But then as we rose up much higher
It was done with nary a sound.

Slowly we drifted Westwards
Then moving slightly to the South
A dozen brave souls in a basket
Gazed at landscapes with open mouth.

Stafford Castle was way down below us
Then the motorway passed by under too
We soon headed away then from Stafford
And quickly Cannock Chase came into view.

We spotted some fallow deer grazing
Some of them sitting as to retire
Then the pilot again fired the burner
And lifted the basket up much higher.

Finally we reached the maximum height
That we were allowed to reach
Four thousand four hundred and eighty feet
A specific height that our balloon couldn’t breech.

It was then that I saw with amazement
While the evening sun shone at our side
A passenger liner flew up through the clouds
It was a beautiful sight which no-one denied.

And did I get such a fabulous picture
Well of course not, I was too much in awe
By the time I had swung round my camera
A tailplane and the sight was no more.

We were coming to the end of our journey
I thought seeing the plane was the peak
But then we saw Lichfield Cathedral
With its three spires that make it unique.

The experience will always stay with me
Of an evening with a view from above
As we floated about in the heavens
Over countryside in the county I love.

‘August 2000 on a Friday evening in glorious sunshine, the balloon
lying in a heap on Derrington Millennium Green in Staffordshire, UK,
gradually began to fill with air as the pilot and his assistant slowly
pulled at it to allow air into all the creases. Suddenly it stood up
and drifted up into the air, though it was still tethered in four places
to the ground. I had no idea they were so big or so tall.’ ©Joe Wilson2014