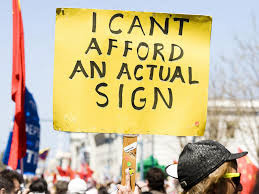 He stood there with his banner in protest,
wanting no more of his people to die.
But the militiaman guarding the building
fired his gun and he took his last sigh.

Why do people stand there in protest
with others who are of the same mind?
And why did the man fire his weapon
and kill a citizen with whom his name rhymed?

The politics go round and gets nowhere
while poor people have to queue just for bread.
And as long as the ones with the guns hold the cards
in that place DEMOCRACY is dead!

The militiaman was beaten to death by a mob
as the media filmed it, we’re depressed.
The man, he lay broken in the rubble and mess
nothing changed in the continuing unrest.

©Joe Wilson – The Pointlessness of This Kind of Death 2014

We think we’re so wise in the West, encouraging the adoption of our kind of democracy. Egypt as an example, has one of the longest histories of any modern state, having been continuously inhabited since the 10th Millennium BC. It also has the oldest parliamentary tradition in the Arab world, establishing a popular assembly as long ago as 1866. It was us, the British, who caused that to be disbanded in 1882, by invading them. We allowed the country to only have a consultative body. It was only after their independence was declared in 1923 that a new constitution was declared which allowed for a parliamentary monarchy. Since that time there have been many changes, not all good by any means.

But is it for us to interfere?

The list of countries in crisis politically is almost endless, but surely the function of other countries is to provide humanitarian aid, and sometimes a safe haven. When the West interferes crises inevitably escalate purely on the basis that our ‘help’ is not wanted in the majority of cases. The resulting refugee situations that always follow such interference and the danger from ordnance left, such as mines, causes almost as much harm as the West claims it’s trying to avert.

And who are we to talk anyway?

The West’s nemesis, Russia is now led by a man who is bent it seems, on gradually putting the Soviet states back together, no doubt with him as its leader. People who oppose him end up in jail, even in so-called elections. The other dark horse, North Korea doesn’t really bear thinking about.

America wrenched itself away from a brutal tyrant in the form of us, England (as it was then), but savagely treated the American Indians to gain land for themselves and to dominate. They also took many diseases to the country that the Indian population had no defence against. They bought black slaves of course too, though a largely odd fact that never seems to get mentioned, that most of those slaves, gathered in African countries like Dahomey (Benin), Sierra Leone, Biafra, the Congo, were kidnapped and sold by other black people, mainly traders or pirates, and often under Government contracts. Black people today in America do not always get a fair deal, but then neither do a number of white people, gay people, or vulnerable and/or disabled people.

And the UK! Slavery existed here too and was only finally abolished throughout the British Empire by the Slavery Abolition Act 1833. In Ceylon (Sri Lanka) it was still in existence till 1843. Men still touched their forelock to the gentry up to and beyond the First World War. It was only after the Second World War, when women having had to work in the ammunition factories and finding themselves being forced back to the kitchen sink, and men realising that their blood was the same colour as the gentry’s, that people started to get educated and achieved a kind of equality. Of course even today, in the 21st century, women don’t get equal opportunities for jobs, nor get equal salaries for doing the same work. Ethnic minorities still often find themselves on the receiving end of abuse or violence, or both. Gay and Lesbian people still find people looking down their collective noses at them. We have some members of the Police who let down the majority by behaving criminally, as is true also in the NHS, and the Press, and of course in politics, where there is so much corruption it doesn’t give them any credibility at all.

We are no paragons ourselves.  So as I say, who are we to interfere?

Who the hell do we think we are?

I’d like to thank Melissa S Jordan (http://melsj.wordpress.com/ ) who  nominated me for the “Being a Light in the World Award,” for the critique-like poems I wrote about the utter futility of war. I feel greatly honoured, it is rather rare for me to win awards.

The award was created in 2012 by Barbara Matteo who blogs about women’s issues and spirituality on the blog idealisticrebel.

“Barbara created the LITWA to celebrate those wonderful people in our world who spread light, love, hope and peace in the name of humanity. Bloggers receiving this award are encouraged to continue promoting these virtues and work as a force of peace and light in the world, touching their readers’ hearts and making a difference in their lives, no matter how small. The award has as its background a scene of a beach taken at sunset with holidaymakers enjoying themselves. This picture was taken by Barbara herself. Just as the Sun in the picture brings light and sustenance to the Earth and is the reason why any living thing can exist on our planet in the first place, the LITWA is a gift to those bloggers who help shine the light into other people’s worlds, giving them sustenance, hope and happiness through the venerable dialogue of blogging.”

I will always try to live up to this award.

It is the time of the greatest of sadness
The memories are still fresh and so raw
When the moment comes back to that tick of the clock
And the last time you walked in through that door.

One o’clock daily I will stare at the door
Begging it to open with you there
With your heart full of love that was sadly so frail
You’re now only a memory in this home that we’d share.

I touch one of your sweaters and smell your perfume
And my heart breaks as I think back to that night
When you told me you loved me and you would all your life
And you did, oh you did, now you’ve gone from my sight.

I still keep your diary by the side of the bed
I’ve decided not to open it for now
I think if it stays shut you’re perhaps still inside
I can deal with that, I think I know how.

It’s that time again now and I look at the door
Though I know that you’ll never come through
But I still have the memories of all that we shared
And they hold me together like you’d do.

When the clock ticks one now I stare at that door
I’ll stare at it till the day that I die
And by the time that they lay me into the earth
I’ll once again be there right by your side.