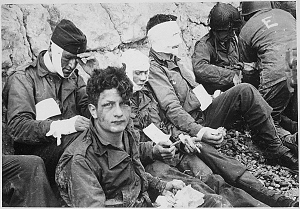 He was sent to Aldershot for training
He would learn how to kill or be killed
The training was all done with broomsticks
When he thought back it made his blood chill.

His unit was sent down to Portsmouth
To board a ship and go over there
It was packed to the gunwales with weapons
And the rations left no room to spare.

He practiced with his rifle on the journey
Like others who’d not held one before
He’d no sense of the horror he’d be facing
Nor the violence he’d always abhorred.

It was such a small piece of shrapnel
Caught both eyes as a shell case shattered
He never saw his two boys as they grew into men
Missing out on so much that had mattered.

His wife who he loved always helped him
And a life with new interests grew
He learnt how to read the braille papers
It pleased him he’d still know the news.

But the trauma from the experience scarred him
And ire with politics grew by the day
So he took to his new odd braille keyboard
And wrote articles and letters to complain.

He could sense the new way that the wind blew
In the corridors of power in the House
There was money to be made in new weapons
And politicians ignore those who grouse.

Then again two decades later it started
Another war that would mean more dead men
The obscenity rose like a bile in his throat
So once again he took to his ‘pen’.

One in a group of poems recognising the centenary of WWI